At the final plenary session the section leaders formulated proposals for the final resolution which later will be submitted to the country’s leadership.

At the final plenary session the section leaders formulated proposals for the final resolution which later will be submitted to the country’s leadership.

Member of the Federation Council Elena Mizulina pointed out four projects discussed during the round-table talks dedicated to the public and government partnership in the implementation of the family policy concept. These are the development of regional social “road maps” in the field of family and childhood, early foundation of the coordination council on family information policy, similar councils as well as creation of data base for projects that were realized under the public and government partnership.

Head of Department of Sociology of Family and Demography at MSU Anatoly Antonov mentioned about necessity to monetize mother’s work, to establish faculties of demography and family in institutions of higher education, to include more indicators on marriage into the population census and to seek for the focus of society on family interests.

Chief visiting otolaryngologist of the Healthcare Ministry of RF Nikolay Daykhes underlined the need for spiritual education for future medical workers and expressed confidence that there had been a change in the society towards health protection and healthy way of life.

Head of the Sector of Demography, Migration and Ethno-religious  problems at the Russian Institute of Strategic Research Igor Beloborodov emphasized the importance of making the notion of traditional family values more detailed and fixed.  According to Igor Beloborodov  it should include early marriage, solidarity between generations, family hierarchy, chastity, marital fidelity, sanctity of motherhood and having many children.

Head of the project “You are not alone” of the All-Russian programme “Sanctity of Motherhood” Elena Ragulina focused on how important it is to disseminate the experience of the project across all the regions of Russia, to develop the scientific approach in the field of psychological consulting for women, to establish partnership of healthcare institutions with public and religious organizations.

These points as well as other ideas will be included into the final resolution of the Forum which will be published after December 10th: before the date the organizers are waiting for proposals from the participants and after that the final document will be placed on the website of “Sanctity of Motherhood” programme. All the proposals will be submitted to the country’s leadership as well.

—Following the possible negative trends in the demographic field in the near future due to decreasing birth rate in 1990s the participants of the Forum find it necessary to  concentrate efforts on the promotion of the basic rules of way of life of a traditional family with many children in information, educational and cultural spheres. For the sake of this task we appeal to all the creative power in our country to join their efforts — these are the words from the participants of the Forum which were read aloud by Vice-President of the Centre of National Glory and the Foundation of St. Andrew the First-Called Vladimir  Mischenko.

At the end of the Forum  the Chairperson of the Board of Trustees of the All-Russian programme “Sanctity of Motherhood” Natalia Yakunina told about the projects that are to be implemented already. For instance, next year a contest will take place which will give a new impulse to the project “You are not alone”: they will select and award healthcare institutions that save the biggest amount of lives. One more proposal is regarding the holiday on June 1st which is the honouring day for Saint Dmitry Donskoy and Euphrosyne of Moscow. The idea is to add a new  meaning to the day and to cover the topics of families with many children and not only the children protection.

—Each Forum is an important step for development of not only our programme but also of the whole family policy in Russia. Family is an ongoing value. The existence of the human kind depends on it. But currently it is vulnerable, it needs to be protected by the state and society. I hope that by the next Forum we will get remarkable results aimed at family protection — resumed Natalia Yakunina. 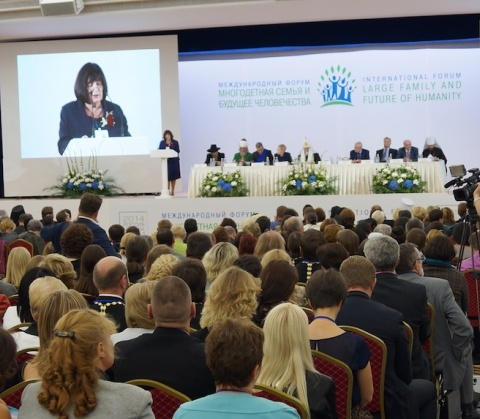